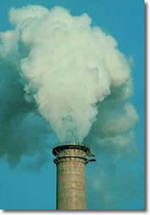 The Swift Institute on Global Warming
May, 2007

Life is deadly. All living things that breathe oxygen burn their food and emit poisonous CO2 as a pollutant. With every breath they contribute to the concentration of CO2 in the atmosphere, and, hence, to global warming. And yet, for all the frantic formulas floating around aimed at the reduction of CO2 emissions, particularly through limitations on the burning of fossils fuels (dead living things), little attention has been paid to this obvious other source (still living things). Rough calculations suggest that CO2 emissions from the burning of fossil fuels are dwarfed by the emissions from these living things, including human beings. Emissions from human metabolism alone, assuming a world population of six billion people and an averaging of their state of activity, are estimated to be equivalent to approximately half of 1990 fossil fuel emissions. Add to these human sources the CO2 emissions from all other creatures on the planet, including plants which respire as well as photosynthesize, and the total amount of emissions from living things is staggering.

To forestall the forecasted calamities of global warming, there must be a reduction of “living things emissions” (LTE’s). This can be approached in two ways, by reducing the number of living things, through their humane or not so humane elimination, and by reducing the amount of respiration of each living thing, through enforceable limits on exertion. With regard to the first, we appear to be well on our way. The loss of habitat through development, deforestation, and agribusiness has contributed greatly to loss of life and species extinction. Warfare will continue to contribute significantly as well, along with genocide. Human and animal population control and sterilization further limit LTE’s. All of this is a good start, but just a start. It’s time to let go of our pets. The number of livestock on farms, which has swelled enormously, could be cut back substantially with the elimination of meat from our diet. We must also begin to give serious consideration to euthanizing expendable members of our family and community. With regard to worklife and lifestyle, we must work hard at not working hard, thereby lowering our metabolism, respiring less, and reducing our CO2 emissions. The impulse to exercise must be exorcised, along with fitness clubs, marathons, and organized sports. Caffeine, which speeds up metabolism, must be banned. The work ethic must be replaced by yoga and meditation. Only by minimizing all effort will we survive. If we are serious about reducing CO2 emissions, we must all do our part, as little as possible.
Posted by Denis Rancourt at 3:13 PM

In yoga and meditation, often breathing is an important part, or increased breathing, so it may also continue to contribute to co2 emissions.

It is sad that such a serious subject is treated in such a silly manner. If you have anything of substance to say why not say it at realclimate.org ? If the real science is wrong then surely you can show how and why, and if you are incapable of that, then maybe it is because you are wrong.

It is indeed sad.

I'll post my comment on this line of 'research', lest anyone be taken in by this, for a third time. It's not just that his calculations are, at best, 'rough' or that he's disagreeing with the consensus -- it's that he doesn't even understand the issue (as his discussion of 'net global increase' and CO2, amongst others, reveal). The good news is that htoseof us who are trained and published in the field of environmental science can all declare ourselves wormhole experts I guess.

DGR: Do you count yourself among those trying to make a buck off of climate change?

I mean, you're a prof of physics, great, but haven't we established that physicists are stupid?

Heck, I guess since you describe yourself as someone who has

"been researching and writing this article for many years; [and has ever since] decided to switch my teaching and research interests from physics to environmental science"

you must have some peer-reviewed science to back these conclusions up, right? The type we might find in a journal for instance? You wouldn't just jump on the bandwagon and then pretend to know which direction it's headed, right?

That'd be absurd. Like Lomborg's arguments on biodiversity, for instance.

Good job. This is exactly the kind of crap that makes Universities squeamish about handing out tenure to people who could espouse controversial views in a field they know something about.

My heavens! Do "real scientists" not read anything but their self-referential industry journals? Duh -- Jonathan Swift? A Modest Proposal? For just one example? Our dissident scientists, Drs Noble and Rancourt, may not do good satire, and some may even find it in bad taste (some will always find satire not to their taste) but it is plain silly (not to say simply sour) to call it bad science. Get a life, boys!

We're not talking about an industry, we're talking about a methodology.
Reality must take precedence in the search for truth, and one way to guard against confirmation bias cases is peer review. Context is everything.

Science is a journey - for the individual and the collective. It isn't about picking the trendiest topic you can think of, declaring yourself an expert, and starting a blog. Read his paper and then read the scientific basis report of the IPCC -- I'm not blaming him for the wrong answers, I'm blaming him for asking the wrong questions. There's no due diligence here.

Activism certainly has it place, but it shouldn't masquerade as science or promote the dissemination of junk science. 'Everybody else is doing it' is not sufficient justification, especially from someone who so (misleadingly) advertises his credentials as a scientist.

OMG these commentators can't even tell this was a satire. Yet they wonder why we think they aren't very bright.

Since civilization, and particularly developing nations, will not, in any shape or form, significantly slow the growth of man-made CO2 emissions (no matter what the alarmists demand); then, I would guess that we are going to eventually see how these modelled climate projections pan out. 'Bout time, I'd say...I got money to wager on this..

This geologist would like to point out that the various (and uncertain) factors that have caused the glacial and interglacial climates that occurreed during the relatively recent past (Pleistocene Epoch), are completely overlooked by this "theory" and the associated, hokey models. These factors (and other, possibly more significant man-made forcings) somehow have ceased to be operative in the view of the non-scientist media, political ignoramuses, and greenie fools.

CO2 is still very much a trace gas (wasn't always). CO2, along with that more important "greenhouse gas", water vapor (H2O), is a building block of something called "life". CO2 is not a "pollutant".

I believe we need to be energy efficient and conserve our resources; but for a bunch of other reasons.

Congratulations on an amusing satire piece. Too bad Hermaan and others are so far gone they don't get it.

I wanted to make a point about the exhaled CO2 by humans and others. Goes something like this:

a) Everything we eat comes ultimately from plants.
b) Plants get the carbon only from CO2 in the air.
c) Hence, all the CO2 we exhale comes only from the air.

Important to note the only source of CO2 is air. We don't get the carbon from the ground.