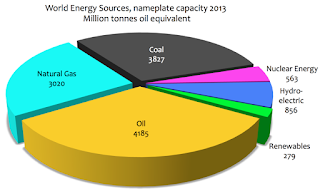 Let that sink in.

Now imagine what that means in terms of physical infrastructure and organization of the world economy.

Given this evident reality, any carbon management plan can only be for actual reasons other than halting world development or significantly altering the use of fossil fuels.

Carbon management plans can never stop energy use or significantly divert the economy towards more expensive sources than the ones currently available and into the foreseeable future.

Such plans (the "carbon economy" legal and financial instruments) are advanced and promoted for other reasons, practical reasons, such as:


There you have it. These are possible underlying motives of the global push towards carbon management. The alleged "saving the planet" motive is a delusion that the dominant global oligarchy does not share with gullible propaganda consumers.

The underlying battles are real and are tied to competing corporate, finance, and geopolitical entities.

The shale sector is presently a wild frontier that does not want to be suppressed whereas big oil is happy to be "green".

BRICS is emerging and will surpass the US constellation but not without a vicious fight that already includes carbon management pressures and wars for energy reserves and pipeline routes.

"Climate change" is the perfect pretext that energy reserves should be in the hands of the dominant US energy corporations and their financiers, which allegedly alone have the required technologies of efficiency and the capital leverage to develop alternative technologies...

And so on. That is the game behind the media show that is visible and that is blaring the carbon-induced-human-extinction scenario.

I've been making the obvious point for over ten years [1] that the global corporate-finance web of energy extraction and use will not and cannot be restructured to reduce CO2, never mind the fantasy of affecting global mean surface temperature via CO2 management.  In the latter regard, I have outlined the basic science itself: The physics of the planetary radiation balance [2]. My contributions to these various debates are listed here.