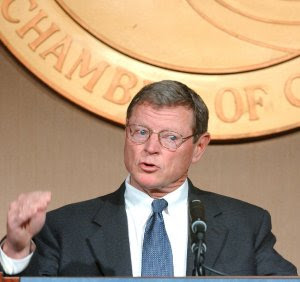 US Senator James Inhofe (R-OK), Ranking Member of the Environment and Public Works Committee, delivered a more than two-hour floor speech on October 26, in which he cites Professor Denis G. Rancourt (University of Ottawa, Editor/Manager of the Climate Guy and Activist Teacher blogs), in some detail here…:
EPW-Senate.gov/Inhofe-speech

The citations are drawn from (and linked to) Rancourt’s February 2007 article Global Warming: Truth or dare? which will be print-published in part in the next issue of DESIGNER/builder magazine.
This may be the first time that authoritative material is used in the US Senate directly from a scientist’s blog; thereby circumventing the scientific peer review process, that has recently been severely criticized.
The complete citation is as follows.

‘Unverified, remote, and abstract dangers'
The global warming scare machine is now so tenuous, that other liberal environmental scientists and activists are now joining Giegengack and refuting the entire basis for man-made global warming concerns.
Denis G. Rancourt professor of physics and an environmental science researcher at the University of Ottawa, believes the global warming campaign does a disservice to the environmental movement.
Rancourt wrote on February 27, 2007: "Promoting the global warming myth trains people to accept unverified, remote, and abstract dangers in the place of true problems that they can discover for themselves by becoming directly engaged in their workplace and by doing their own research and observations. It trains people to think lifestyle choices (in relation to CO2 emission) rather than to think activism in the sense of exerting an influence to change societal structures." (LINK)

Rancourt believes that global warming "will not become humankind's greatest threat until the sun has its next hiccup in a billion years or more in the very unlikely scenario that we are still around." He also noted that even if C02 emissions were a grave threat "government action and political will cannot measurably or significantly ameliorate global climate in the present world."
Most significantly, however, Rancourt -- a committed left-wing activist and scientist -- believes environmentalists have been duped into promoting global warming as a crisis. Rancourt wrote: "I argue that by far the most destructive force on the planet is power-driven financiers and profit-driven corporations and their cartels backed by military might; and that the global warming myth is a red herring that contributes to hiding this truth. In my opinion, activists who, using any justification, feed the global warming myth have effectively been co-opted, or at best neutralized."
"Global warming is strictly an imaginary problem of the First World middleclass," Rancourt added.
Finally, Rancourt asserted that in a warm world, life prospers. "There is no known case of a sustained warming alone having negatively impacted an entire population," he said, "As a general rule, all life on Earth does better when it's hotter: Compare ecological diversity and biotic density (or biomass) at the poles and at the equator," he added.
Indeed, 2007 has turned into the "tipping point" for the unsubstantiated fears and gross distortion of science by activists who have committed decades trying to convince the world it faced a man-made climate crisis. Rancourt so eloquently summed up the movement as one featuring "Unverified, remote, and abstract dangers."

One theme of the Senator’s speech is that 2007 is a turning point in becoming conscious of the fabricated nature of the global warming threat.
Climate Guy and Activist Teacher have argued that such consciousness would be a contributing small step in the overall turning point towards global fairness and democracy that must occur, if it is accompanied by deep activism of the heart rather than replaced by another superficial myth of the mind again intended to divert our attention and energy. Examples of past and present such superficial myths of the First World middle class mind are: acid rain, ozone depletion, soil depletion and peak oil. These sanitized and distributed-responsibility abstracted phenomena replace the real problems of continental-scale profit and power driven finance and corporate extortion and exploitation, enabled by genocidal destruction and backed by military might.
Posted by Denis Rancourt at 10:46 PM

I am very encouraged to see that Prof. Denis Rancourt's message is getting out there that we need to attend to our tyrannical"social" system because we are all going down for the count under its lunacy.This is obviously important for environmentalists but it is equally important for activists and every member of public at large. Focus on the most critical problem of inequitable distribution of power and wealth is also where I would like to see us start the trip back to sanity.

I certainly agree with Jane that activists need to focus on the inequal distribution of power and wealth, the main source of the world's problems. Getting back to Denis' blog, however, I would be very careful, to say the least, about citing Senator James Inhofe about anything. The man is a pro-war fascist. Check out http://www.counterpunch.org/jackson05122004.html for his complete dismissal of any criticism of torture in American prisons in Iraq, for example.

What does Senator Inhofe know about science, anyway? The man has a degree in economics and has never worked in scientific research. More importantly, Inhofe has received more funding from the oil and gas industry than any other U.S. senator. He's pulled in $3.4 million in the last 5 years. I think his objectivity on climate science is extremely suspect.

Well, you're out of the sandbox now. Careful what you wish for, I guess.

By the by, wayne makes an interesting point. In the interest of full disclosure -- can we get some assurance DGR has never received, nor will accepts, funding of any type from what could reasonably be conceived of as 'oil' and/or 'gas' interests?

Rancourts ideas on climate change are stunningly inaccurate, insulting and arrogant. You don't think 1000s of scientists around the world weren't careful enough in their measurements? Publish your proofs of this in scientific journal.

And the statement that warming is good for all concerned is beyond belief: Ask the Inuit people how much they're enjoying the fact that their way of life is melting away with the ice. Nice social equity that is. And oh yeah who got hit hardest by the thinning ozone layer...?(hint not the folks in middle class Ottawa)

By they way, don't you think there is a direct connection between "power-driven financiers and profit-driven corporations and their cartels" and climate change ?

Most people would cringe at being cited by Senator James Inhofe... As Wayne says he's a prowar fascist, heavily funded by America's oil and military lobby...and he's happy to use any 'scientist' to push the oil and coal industry's agenda and keep those million dollar donations coming.

Congrats, Dr. Rancourt. Facts before ideology. Even if Inhofe's politics leave something to be desired, that doesn't negate the force of Rancourt's objections to AGW. In fact the little Gorean types of liberals have no ground to stand upon when playing the political bias-game. Inhofe is hardly more right-wing than Gore, Occi. boy, and the Israeli hawks who have issued orders to Al Jr. for years.

Leahy is mistaken about the data as well: the alleged temp. swings do not overcome the margin of error of "official" temp. data over the last 100 years or so! That both rightists and leftists have pointed this out in fact indicates a lack of bias.

We don't care for Inhofe anymore than we do the Crichton-quoting rightists (or some petrol-ho such as McIntyre), but that doesn't mean they are mistaken in their GW contrarianism. You might not have cared for Werner Von Braun, one-time nazi, but he could solve integral problems as well as communists could.

THEIRS BE THE TEARS (AFTER VENTURA)

Burning a bit of Eden drive
Away your shame and sorrow--
Happy you are to be alive,
In spite of what you borrow.

The debt will have to be repaid
By those that follow after,
Yet--so the laugh is you got laid--
Theirs be the tears not laughter.