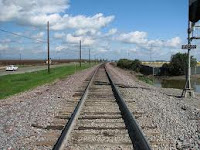 thank you ! Just read some of your stuff re' Anthropogenic global warming and Ozone. [HERE]
I am an Australian Trade Unionist and Official of the 'Militant' kind.
I have been so disillusioned with the left as it appears now nothing more than a club of misanthropic nature worshippers, dominated by the middle-class and their angst.

I am dumbfounded when the left see a Emissions Trading Scheme as progressive!
Regressive is more like it ! Their dumb, anti-corporate angst makes them want to 'make the polluters pay' - fuck how dumb.
Workers and the poor will pay and pay. Rent taking and monopoly capitalists will clean up.

This anti-coal/oil hysteria is insane. I know that my prosperity as a worker rides primarily on the cheap energy that the English first unlocked in coal to bring about the Industrial Revolution, now we want to bite the hand that feeds us ! Such is the blind hatred, that we turn agriculture from food production to fuel production, ethanol.

This has caused untold misery and devastation as it has according to the UN caused food prices to double.

A friend of mine says that "when we use food for fuel, the end of civilisation is near."
Ironically, ethanol needs 30 litres of water to produce a litre, whilst oil only requires 3 and ethanol produces more CO2 (the alleged demon gas) than oil!
But some tool will think he/she is 'saving the planet' by filling up on ethanol fuel !

p.s. these two links are to Emission Trading pressue groups, the IETA is the most powerful 'cap and trade lobby on the planet - every major corporation is involved including, 'Big Oil' (i hate that dog whistle)

Denis, no problems mate use it ! If it can help anybody to stopping drinking the 'cool-aid' of misanthropic fear - it will be worth it!
[...]

p.s I am a train driver, so I found the radio name [of your radio show "The Train"] amusing but more importantly, i work with about 300 workers, yet hardly any 'buy' the anthropogenic warming fairy tale, my mates in construction say the same - its called a 'Doctors wives' issue, here.
Those who are secure, wealthy and have enough time buy it.
You are far better informed than I, but I loved this guys take, - Geraldo Luis Limo, director of the Ibero-ameriacan solidarity movement:
http://www.globalresearch.ca/index.php?context=va&aid=9199
Posted by Denis Rancourt at 10:52 AM