Global Warming is Causing Extinction of the Political Species 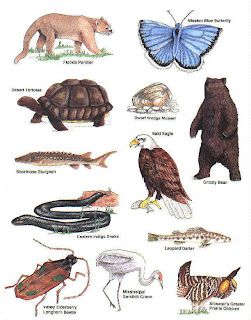 A castrated animal looses its territorial and reproductive drives to become primarily concerned with its consumption. Environmentalism is being used to neutralize citizens that would normally be politically engaged in proportion to the magnitude of current problems. Mainstream treatment of global warming, from media reports to Discovery Channel documentaries to Canada’s Two Ton Challenge, and its measurable influence on public opinion and concerned citizen involvement are records of an effective program of indoctrination, away from direct challenges to concentrated and institutionalized power and towards personalized involvement that is in harmony with capital’s undemocratic control of the economy and resources.

Consciousness regarding environmental problems leads to a large array of reactions on a multidimensional continuum that includes at least two end points: To concentrate on one’s own consumer and lifestyle choices and to encourage others to do the same, to treat the problem from the perspective of individual psychology, or to act politically to remove the power structures and institutions that are the societal root of the problem. While it is true that ecological lifestyle choices and effective political commitment are not necessarily contrary, just as one can be a meat eater and a dedicated environmental activist or a vegan vegetarian enrolled in an MBA program, environmental consciousness can be and is manipulated away from any consequential attack on the status quo. The apolitical variety of environmental involvement is strongly encouraged by capital and its government shadow, via everything from foundation funding to media coverage to government programs to responsible corporate citizen endorsement, etc.

And let us be clear, the status quo is a world run by profit-driven investors and corporations, backed by military might, that are by far the main destructive forces on the planet. If we shed our privileged perspective for a moment and let go of the absurd notion that the greatest threat to humankind is global warming and associated climate changes, we might see the Empire and its satellites for what they are, we might see war crimes and exploitation on a scale that would perturb even a global circulation model theorist.

The best measure of these crimes is not anthropogenic CO2 emission. There are more graphic statistics than that. There are real and immediate regional and continental-scale environmental consequences that are best measured by their impacts on life, human life in particular since we inhabit every environment. These include: the effects of economic sanctions on national populations, declared and undeclared wars of occupation, US state-sponsored terrorism (most other terrorist networks pale in comparison), the effects of capital mobility (in both First and Third Worlds), the effects of First World financed corruption, the effects of capital exploitation via national debts, the effects of First World imposed economic structural adjustments, the effects of forced market, work-force, and resource access on the terms set by capital (i.e., so-called globalization), the consequences to native inhabitants of being in the unfortunate situation of living on resource-rich territories, the effects of television, mass media, and advertising on the human spirit and on family and community, etc. These translate into traditional environmental measures such as: depleted uranium pollution on regional scales (ugly stuff if you plan on having a family in the next thousand years), chemical industry accidents in populated areas, deforestation and associated water table losses, agri-business impacts on soil depletion, water pollution, food safety, habitat destruction, etc., ecological, biological, and societal consequences of human pharmaceutical use, etc.

Communities based on the quality of human connections, not serving corporate greed or manufactured dreams of wealth, fame, and immortality, and tied to the needs of others and their dependence on a shared environment, are sustainable and environmentally sound. The environmental movement itself is an expression of this vital human thrust but, as informed First Worlders, we cannot simply behave as though an ideal world of collaborating communities of sensitive individuals were possible under the present regime of madness. We need to force our governments and corporations to stop destroying the web of such communities that spontaneously wants to create itself. We have a responsibility to sustainably risk as much as we can in being as effective as possible in dismantling the power structures that will otherwise turn our planet into an illusion of heaven for few and a real hell for everybody.

The enemy is not individual stupidity or any human trait. The enemy is the very real network of exploitation and mind control that we have allowed to take root in our society. We must take it out, action by action, reaching deeper and deeper with every new tactic and strategy. We must be as conscious of our mental and political environments as we have become knowledgeable of atmospheric chemistry. Let us be environmental at home and political – far beyond voting and postcards to MPs – at work. Consider that we are at war. This is a war, literally. It is insane. It could destroy the planet. It’s time to be radical; to uproot the cancer of undemocratically controlled investment capital and to disallow capital and military invasions.

Epilogue: I have received some rather harsh criticism for this piece. By "Environmentalists go home" I mean go to the source; the fact that environmentalism can be an expression of community building but is not activism in itself. I explain this in detail in Activism and Risk - Life beyond altruism. These writings are intended to jolt community builders into realizing the need for activism.

Posted by Denis Rancourt at 3:43 PM

Frankly, I think the left are in the main either ignorant of or unwilling to face some elementary facts. In the case of GCC, George Monbiot's targets (I take Monbiot to representative of the mainstream consensus) have radical politico-economic implications. If they were implemented with the market economy left intact the results would surely be disastrous. In concrete terms there is no way out of a huge reduction in manufacturing, in power generation and transportation; alternative fuel sources and technologies improving efficiency do not appear to exist that would suffice to enable anywhere close to an 80% reduction (apart from all of the new problems many proposed alternative such as biofuels introduce). In an economy dependant on production and consumption this would mean a massive loss in jobs (apart from a new lot of bureaucrats and managers) and whatever taxes were placed on fossil fuels would make everything impossibly expensive for the poor (regardless of car ownership; electricity, heating fuel and goods which are shipped, basically everything you buy, would all skyrocket in price)--i.e., a large sector in the US that is struggling desperately as it is. And it is naive to expect that GCC policy will somehow undo the fabric of the New World Order. Any policies that are put into practice will either be quack solutions (assuming the problem is even as serious as it’s out made to be) or, if imposed sincerely, will only exacerbate the problems social injustice (CGG legislation could potentially even introduce new opportunities for population control, such as new laws infringing on civil liberties and greater restriction on free movement—even provide new pretexts for foreign interventions?). On balance, my sympathies are with the poor and the people of the South if this is the choice that comes down to.

Radical political change is clearly in order. But until genuinely democratic forms are in place, I think there is every reason to doubt that constructive measures on the environment will come out of our political system (in fact meansures taken in the name of the environment would almost certainly be ineffectual token efforts or positively destructive). It seems to me to be as absurd as to believe (e.g.) that the NATO/Kosovo War was a humanitarian intervention (as Clinton/Gore would have had us believe); elite interests are by their nature in direct conflict with social justice and saving the environment—they thrive on destruction. We must stop looking for a Golden Key, must stop looking for a savior, and take responsibility for ourselves.

I should note, I am not convinced that "what the science says" (having read a number of peer-reviewed articles supposedly making an incontrovertible case for AGC) really warrants any action being taken at this time. This is not a “denialist” position. We are talking about drastic measures that would come at a high price and we need to damn sure, I think, before proceeding (and even if we were damn sure, it would still be reasonable, at least in principal, to decide to take no action—at any rate the decision must follow informed public discussion and debate and be made by the general public, not self-appointed representatives or experts). Incedently, regardless of relevant scientific fact, the Climate Change Industry clearly already exists, it is parasitic and should be condemned, but also seen in perspective—there are much worse evils in the world to fight. The main thing is to make sure we don’t buy into any insane policies.