9-11 and global warming are both inside jobs 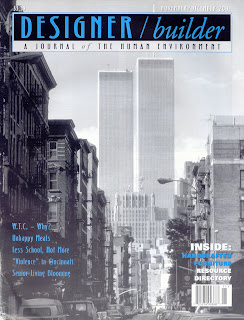 Glimate Guy has recently come across the most remarkable and in-depth article on how and why the Twin Towers collapsed…! It was published in the November/December 2001 issue of the print magazine DESIGNER / builder: A Journal of the Human Environment and has not previously been posted on the web, but HERE IT IS.

DESIGNER / builder (Db) is a gem of a small-circulation radical magazine out of Santa Fe, NM. Db’s publisher Kingsley Hammett located and interviewed now 67 year old Jim Malott, a welder, architect, and jet crash expert who followed the birth and rise of the Twin Towers with the passion of an investigative photo journalist and materials engineer enthusiast… His analysis is unparalleled and puts the mainstream scientific community to shame.

The article contains dozens of historic photographs – a must read for all 9-11 activists.

In a nutshell, the business lobby transformed building code regulations in order to maximize profits for powerful interests, while covering their asses with made to order safety tests… Sound familiar?

First World activists turn to tenuous 9-11 conspiracy theories about homeland threats while the real crimes are the murderous wars in Afghanistan and Iraq, and the broader global stranglehold that they enforce and the profits that they directly generate…

First World climate change activists turn to tenuous model predictions anchored on CO2 while the real crime is the global-scale exploitation and resource extraction monster that feeds financial lust at the cost of everything.

They’re both inside jobs, performed by the power insiders that compulsively strive to generate continuously growing returns on capital, here on this finite planet.

Let’s get away from the red herring details and take down the beast. Capital concentrations that change human and geographical landscapes are tyrannical. Profit predation is democracy’s main enemy and the planet’s worst scourge. People need to control their own spaces: We don’t need landlords. We don’t need maximum profit.

Fight it where you can: At work, at home, at school. Don’t let capital, corporations, institutions, or anyone be the boss of you. Fight back. Don’t drop out. Don’t cooperate. Don’t hide. Fight the machine! That’s something we can all do that’s good for everybody and good for the soul. Risk it. Do it. You can’t learn it from a book!

First World wimps and gatekeepers are accessories to murder and genocide.

Rock on Doc Rancourt. Require the global warming hypemeisters to prove that the temperature data is even correct. How much have mean global temps (if those can even be estimated) supposedly gone up in last 40 years or so? 1-2 degrees C? Barely anything. (are there 1000s of reading from points all over the globe for years? Unlikely: it's "modelled"--the tree ring data itself nearly unreliable). I wager if you had the sample of the temp. data the margin of error might itself be enough to show that temps have not even increased--or that the increases are negligible.

I've been chasing down the Designer Builder article about jim Malott. It took a while to find one, but I finally found one archived on the innertubes. It's apparently an inconvenient article for the NIST, and I agree with your advice on questioning authority.

btw: Your link to the article isn't working, along with a lot of others I have checked out...G:

What you are doing with Global Warming architect Richard Gage has done with the official conspiracy theory concerning the 9/11 collapses. The theory does not square with the facts.

If you have not yet come across this information you will benefit from Gage's presentation:

Architects and Engineers for 9/11 Truth
http://www.ae911truth.org/