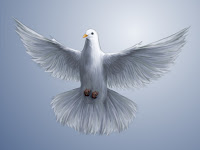 Primordial religions have always been about avoiding the calamities of climate: drought, fire, disease, war... But religion has also always been more that an individual alleviation of insecurity and guilt. It has been a stabilizing force of society's dominance hierarchies.

Monarchs have always had symbiotic relations with organized religion, and that is no accident. Rulers gain perceived legitimacy, while the church-maintenance class gains high relative social status and privilege. In recent history, one might even argue that the downfall of the USSR was facilitated by a suppressed church.

Clearly, if a system can combine individual-identity-creating beliefs with the impression that the state is vital in defending those beliefs against outside threats, then one has a powerful entity that is directed and centralized, as long as it can all be maintained. A current example is Israel's remarkable success (as a strong and influential entity), against the a priori odds.

What to do in a secular and multi-cultural empire, to prevent dissolution?

In this regard, the author Michael Crichton, among many who followed [1], in 2003 made a key observation to the Commonwealth Club [2]:

"I studied anthropology in college, and one of the things I learned was that certain human social structures always reappear. They can't be eliminated from society. One of those structures is religion. Today it is said we live in a secular society in which many people---the best people, the most enlightened people---do not believe in any religion. But I think that you cannot eliminate religion from the psyche of mankind. If you suppress it in one form, it merely re-emerges in another form. You can not believe in God, but you still have to believe in something that gives meaning to your life, and shapes your sense of the world. Such a belief is religious.

Today, one of the most powerful religions in the Western World is environmentalism. Environmentalism seems to be the religion of choice for urban atheists. Why do I say it's a religion? Well, just look at the beliefs. If you look carefully, you see that environmentalism is in fact a perfect 21st century remapping of traditional Judeo-Christian beliefs and myths."


The empire needs a religion of choice for its large middle and managerial class, where money and materialism do not suffice, and are not sufficiently cemented to identity. And it must be a religion that the state and political class can be seen to champion and defend.

The state religion enterprise is vital to survival and is well finances, directly and indirectly, via the public purse of course.

Climate "science" certainly fulfills the criteria for acceptance as the new state religion. There is no lack of public funding for climate researchers in all areas, from policy to economics to biology to medicine to even climatology, who devise ways for society to avoid "climate liability". This army of protectors of humanity are the (now proverbial) "97%", who don't expressly denounce the climate change god.

The degree to which professional scientists find it difficult to resist wearing the certified climate-change glasses is easy to see for anyone who is looking. For example, my critical review of forest-fire science [a].

The priests and vicars are the above-noted "scientists". But the bishops and cardinals are the elite science-policy leaders and world-finance directors.

Developing-world nations who seek a reprise from all-out exploitation must pledge allegience to the climate-change god.

As I have noted recently in response to the disclosure that "Soros paid Al Gore millions to push ‘aggressive US action’ on global warming" [3]:

"Don't worry CO2 activists, the global financiers and the dominant US hegemony want exactly the same thing you do. They want a multi-trillion dollar global carbon economy that they manipulate, and they want to use it to confine and tax the emerging competing economies (BRICS), enforceable by military intervention if needed 'to save the planet'."


The finance-sector exploitation of "climate change" was highlighted in 2007 by the renowned late historian of science and technology David F. Noble, in his article "The Corporate Climate Coup" [4].

Many free thinkers are deeply irked by this new state religion with global ambitions. We are irked by human stupidity, and we are irked at how easily the citizens of modern societies are corralled into the latest project to direct humanity for the benefit of a few manipulators.

One hopeful nucleus of resistance are the libertarian-minded entrepreneurs who have managed to claim a stake in fracking. Without them, I don't know how much more insane this ride could be.

Against the religion of climate change, common sense and logic seem to have no weight whatsoever.

Furthermore, the fact that there can be public subsidies at all is largely due to the technological ability to harness mechanical work cheaply via fossil fuels, including the ability to militarily maintain global inequality.

Even the 2012 environmentalist's nightmarish horror documentary film of Amy Miller, The Carbon Rush, has not slowed the advancing religion [5].

Dr. Denis G. Rancourt is a former tenured and Full Professor of physics at the University of Ottawa, Canada. He practices various areas of science (environmental geochemistry, soil science, spectroscopy, condensed matter physics, materials science) which have been funded by a national agency, has published over 100 articles in leading scientific journals, (Research Gate profile), and has written several social commentary essays. He is the author of the book Hierarchy and Free Expression in the Fight Against Racism.
Posted by Denis Rancourt at 7:03 PM

In the order from marginal to centrally important:

I'm seeing something of a contradiction between
a. "religion .... has [always] been a stabilizing force of society’s dominance hierarchies."
and
b. "one might even argue that the downfall of the USSR was facilitated by a suppressed church."

Two. allow me to remind you that focus on explaining can drain the blood out of efforts of changing, creating, even of living itself.

And a third, final point: Environmentalists are, by and large, self-declared anti-establishment people. I'm aware of at least one of them who is retired, lives modestly, counts for exceptionally clever, background in natural sciences engineering, truly hates the establishment, being of anarchistic persuasion. The model presented in this article may fail to account for a person like this.