That "tipping point' is nonsense featured on Climate Depot 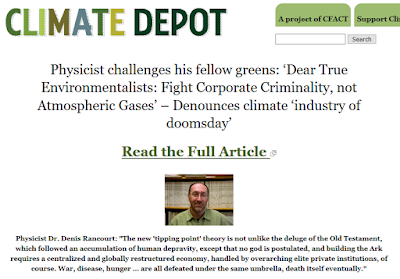 Physicist Dr. Denis Rancourt: "The new 'tipping point' theory is not unlike the deluge of the Old Testament, which followed an accumulation of human depravity, except that no god is postulated, and building the Ark requires a centralized and globally restructured economy, handled by overarching elite private institutions, of course. War, disease, hunger … are all defeated under the same umbrella, death itself eventually."
Posted by Denis Rancourt at 6:42 PM